Track and Trace is a volume-control system which monitors the manufacturing and distribution of tobacco products. Its stated aim is combatting the illegal trade of tobacco products in Europe. The European system entered into force in May 2018 and is up and running since May 2019 for cigarettes and fine-cut tobacco. Other tobacco products, including products which are not subject to any known illegal trade such as pipe tobacco, chewing tobacco or traditional European nasal snuff will also have to be tracked and traced as of May 2024.

The system was mainly designed for and exclusively based on large-scale cigarettes manufacturing overlooking traditional European tobacco products and the way these are manufactured and distributed. Whilst the European Commission claimed the system would create a “level-playing field” within the industry, it in fact drove further market consolidation.

The European Track & Trace system requires that each tobacco package carries a Unique Identifier (UI) code that will be scanned and recorded all along the distribution chain and transmitted to both the manufacturer’s and the EU-wide database, allowing authorities to trace and authenticate tobacco products. This required an entirely new level of data transfer, as well as a highly developed IT infrastructure, and renewed packaging machineries.

The system requires that European manufacturers or importers of tobacco products request a UI for each individual package from an independent organisation, the ‘ID Issuer’, which has been appointed by the Member State authorities. Manufacturers or importers of tobacco products must also set up (and integrate) a database (‘Primary Repository’) to store all the data related to every individual package. All this information is then copied into an EU-wide database (‘Secondary Repository’), which is operated by another independent third-party that was appointed by the European Commission only five months prior to the implementation deadline. In addition, each tobacco pack also must carry a ‘security feature’ consisting of at least five authentication elements that are determined by each Member State for their own markets. In most European countries, this additional obligation required to upgrade the stamps commonly used for excise tax collection.

How does this system work? 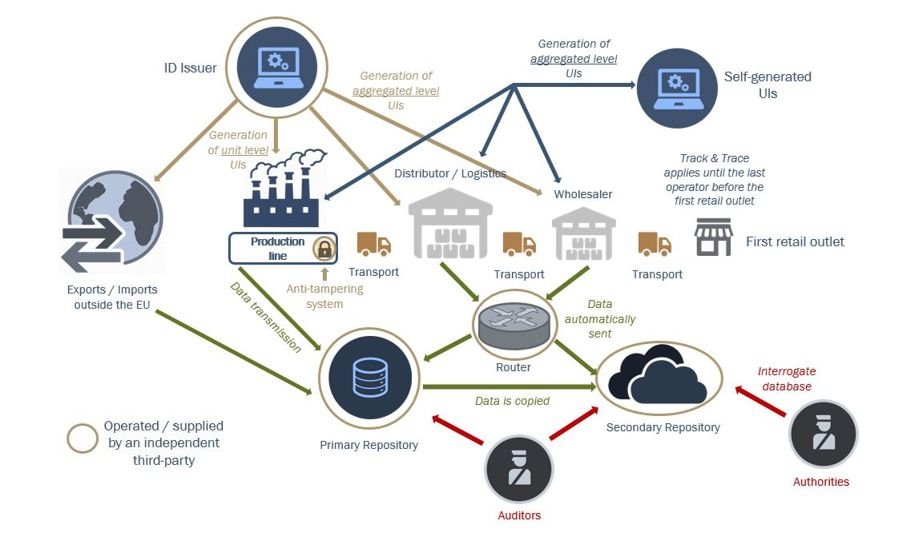 What is wrong with Track & Trace?

The European Union, with Track & Trace, establishes a self-imposed barrier to trade

According to the European Commission, all products manufactured in the EU must carry the European UI codes on the packaging, including products destined for export to third countries. However, these EU codes are incompatible with national tracking and tracing measures in place or being adopted in certain third countries; or are incompatible with third countries’ national packaging and labelling regulations when these prohibit the presence of such code. In absence of international interoperability between national systems, European manufacturers have only 3 options: either giving up on that market (losing volume and revenues); shifting production outside the EU; or trying to implement double-coding (i.e. having two distinct codes on the packaging), which is not a long-term solution, but rather a very costly quick-fix. It is also not a solution at all for certain niche tobacco products.

This self-imposed barrier to trade introduces a significant competitive disadvantage for the many smaller and mid-sized companies manufacturing in the EU, compared to multinationals that operate globally. Whilst the 2014 Tobacco Product Directive clearly mandated that UI marking only apply to products placed on the EU market, the European Commission extended this requirement via the Implementing Regulation. By doing so, the European Commission not only overstepped its mandate, but also created a barrier to trade penalising its “own” companies. Only after adoption it recognised this as an issue that needs to be addressed. More than two years after the implementation of the system, the European Commission has still not solved it.

The initial objective of Track & Trace was to create an EU-wide system. Instead, it is now a patchwork of national ones that once again disproportionally impacts smaller and mid-sized companies. The Implementing Regulation provides that the competent ID Issuer for the issuing of UI codes is the entity appointed in the Member State in which the products are manufactured or imported and should be recognised as such by the other Member States (reflecting the “mutual recognition” principle that is key to the internal market). However, it also allowed Member States to derogate from this general rule and to require that only their appointed ID Issuer is the competent one for that market. All 27 Member States have used this derogation, making it more difficult for smaller companies to market their products across Europe.

Track & Trace is an EU-wide monitoring system that is overly complex and prohibitively costly, which has been mostly designed with the large-scale and standardised cigarette manufacturing processes in mind, completely ignoring the specificities of other traditional and niche tobacco products and European smaller and mid-sized companies. For example, the requirement of the Security Feature was met in most Member States by using upgraded tax stamps. This solution however cannot always be replicated for niche tobacco products, such as for traditional European nasal snuff once the system will be applicable to these products in 2024. European manufacturers are fully committed to make the system work, and before extending it to all other tobacco products, the European Commission must take stock of the difficult implementation during the first phase and carry out a new impact assessment. This should focus on the specificities of niche tobacco products, in terms of packaging sizes and materials, the profiles of manufacturers, the production speed, processes and machinery, the specificities of distribution and obviously, the ability to continue exporting to third countries.

ESTA members manufacture fine‑cut tobacco, pipe tobacco, traditional European nasal snuff and chewing tobaccos in 10 Member States and export their products across the entire world. Skilled craftspeople expertly apply age old techniques, perfecting the mixture of dozens of varieties, tastes, smells and flavours, continuing a centuries‑old tradition of fine European heritage. Up to the end of the last century, the manufacture of tobacco in Europe encompassed hundreds of small producers creating thousands of signature products. Over the past 30 years, smaller firms have been acquired by larger multinational companies or have ceased activities altogether, leading to employment reductions and the disappearance of traditional brands. In the manufacturing countries, tobacco production is often rooted in less advantaged regions and plays locally a key economic and social role. It deserves protection and at the minimum should be considered when developing regulation.

Between 2008 and 2012, consumption of  fine-cut tobacco in the EU28 increased by 37%, even though the increase varies heavily per Member State. Because of the severe economic crisis, consumer disposable income was under pressure, impacting the growth of  fine-cut tobacco consumption. This increase demonstrates the price sensitivity of  fine-cut tobacco smokers.
As the economic crisis subsided between 2012 and 2015, fine-cut tobacco consumption declined in the EU and the market adjusted, returning to its pre-crisis normal order.
In 2016, sales of  fine-cut tobacco kept declining by 1.09% in the EU28. This long=term downward trend follows to an extent industry consolidation.
Seemingly out of step, several eastern countries still experience percentage increases in fine-cut tobacco sales whilst starting at very low sales levels. This demonstrates the buffer function of fine-cut tobacco: cigarette consumers who can no longer afford this product find in  fine-cut tobacco a legal alternative to illegal cigarettes that are often smuggled from neighbouring countries outside the EU (see London Economics Study, June 2015).
Sometimes fine-cut tobacco is mistakenly presented as a “hook” to smoking because of its relatively higher affordability when compared to cigarettes.
The reality of the market shows a very different picture. In most European countries,  fine-cut tobacco was and still is a niche tobacco product enjoyed by “specialist” consumers and traditional tobacco enthusiasts who enjoy fine European craftsmanship.
Few exceptions exist with high market shares in countries where fine-cut tobacco has a long history and forms part of the cultural heritage. In these specialised tobacco markets, the significance of fine-cut tobacco stems from its century-old local manufacturing.
Read more about fine-cut tobacco
Every year, taxes on tobacco products raise more than €100 billion for EU governments. Tobacco tax policy must be delicately balanced to safeguard government revenues, protect fair competition, jobs and public health, whilst also deterring trade in illegal tobacco. Tobacco smuggling and sales of illegal tobacco products threaten this income and society at large. The fight against illegally traded tobacco is part of a wider effort to protect EU citizens.
A successful implementation of Track & Trace will be of crucial importance, and requires workable standards that fit business and trading practices, making them likely to be internationally shared.
Read more about tobacco track & trace

The EU is characterised by a very diverse and flexible excise structure, which allows each Member State to set a balanced taxation of tobacco products respecting its national circumstances, interests and objectives.  Last year, excise revenues from smoking tobacco increased across the EU, even though sales declined. This clearly demonstrates the efficiency of the current flexibility left to national governments and that a “one size fits all” approach should not be considered. The few Member States (e.g. France, Netherlands) casting economic theory and the tax-bearing capacity of smoking tobacco aside had adverse effects with declining revenues whilst sales increased.

An obvious correlation exists between the highest levels of illegal and non-­domestic consumption (e.g. France, UK, Ireland, Poland and Finland) and the highest taxation rates applied to fine-cut toconsbacco, in comparison with cigarettes.  The figures clearly show that any alignment of tobacco taxation, regardless of the products’ specificities, will prevent  fine-cut tobacco from fulfilling its buffer function, leading to increased illegal trade of cigarettes and driving down government revenues.

Read more about the relationship between tax and illegal trade